Hello you wonderful people! I’m so sorry for the lack of posts but this month I started a forensic science course that is keeping me busy. Not that I complain! This course is absolutely amazing and this week I’ve learned a lot about decomposing bodies, putrefaction, bones and blood. How cool does it sound? Speaking of decomposing bodies I’m going to talk to you about an interesting story that I’ve heard of a couple of months ago. Don’t worry it won’t be a gruesome story.

La Pascualita or Little Pascuala is a bridal mannequin that has “lived” in a bridal gown shop window in Chihuahua, Mexico for the past 75 years. It is believed that, according to legend, the mannequin is not really a model at all, but the perfectly preserved corpse of the previous owner’s daughter who had died on her wedding day after being bitten by a black widow spider.

Pascuala secretly took the body of the beloved daughter away from the authorities,  had her embalmed, and then brought the body to her  shop  where is used as a mannequin since March 25, 1930.

I think it might be pretty impossible to preserve a body, even if embalmed, in those perfect conditions, but, hey who am I to say otherwise? A lot of people said that her eyes follow them around the store or that she changes postion during the night. Sonia Burciaga, who’s in charge to change the dummy’s outfits twice a week, says: “Every time I go near Pascualita my hands break out in a sweat. Her hands are very realistic and she even has varicose veins on her legs. I believe she’s a real person.”

Well, my lovely readers, what do you think? Have you ever heard about this story before? I’d love to know your thoughts!

Victorian era is absolutely one of my favourite time of the history and, aided by the fact that during these days I’ve been watching the second season of Ripper Street, I started a deep research about this time. I already knew most of the “weird” facts, but then I discovered that people from Victorian era had a very peculiar bond with death. They used to fear death but they also used to celebrate it, there were many superstions regarding death, for example it was bad luck to meet a funeral procession head on. If you see one approaching, turn around, if this is unavoidable, hold on to a button until the funeral cortege passes. Another one was to stop the clock in a death room or you will have bad luck or another example is if the deceased has lived a good life, flowers would bloom on his grave; but if he has been evil, only weeds would grow. Seriously, there were a lot of superstions back then.

Mourning was also a big “trend” during that time, as of course the quality of life wasn’t that healthy, even though there were some very “bizarre” death circumstances, a woman died because her corset was too tight, or a man died swallowing his false teeth (false teeth were made of teeth of recently deceased). People used to hire professional mourners for funerals. Yes, being a mourner was a serious profession. But if a lot of people used to fear death other people used to celebrate it. In Victorian Paris (Belle Époque) there was a nightclub death-themed called Le Cabaret du Néant (The Cabaret of Nothingness or Death) where people attended a proper “tour”.

First they were welcomed and served by waiters dressed as monks or funeral attendees who offered drinks named after diseases which were imbibed on top of coffins and caskets into the Salle d’Intoxication (Room of intoxication), then the monk led the audience to a second chamber (Caveau de Trépassés) where a volunteer was asked to step up on a stage and enter a standing casket. After the volunteer was wrapped in a white shroud the spectators gasped at an apparent “X-ray” effect (Pepper’s Ghost effect) as the man dissolved into a skeleton and then once again returned to plain sight as the skeleton disappeared. In the last chamber, using a similar optical effect, a live spirit appeared to walk around the audience.

There were other nightclubs “after-life” themed. There was Le Cabaret de l’Enfer (Cabaret of Hell) a hell-themed café which was very close to the famous Moulin Rouge in Montmartre. In this club people used to drink around a caldron while “red imps” served them drink and hopping within the caldron there were half a dozen devil musicians, male and female, playing a selection from “Faust” on stringed instruments. 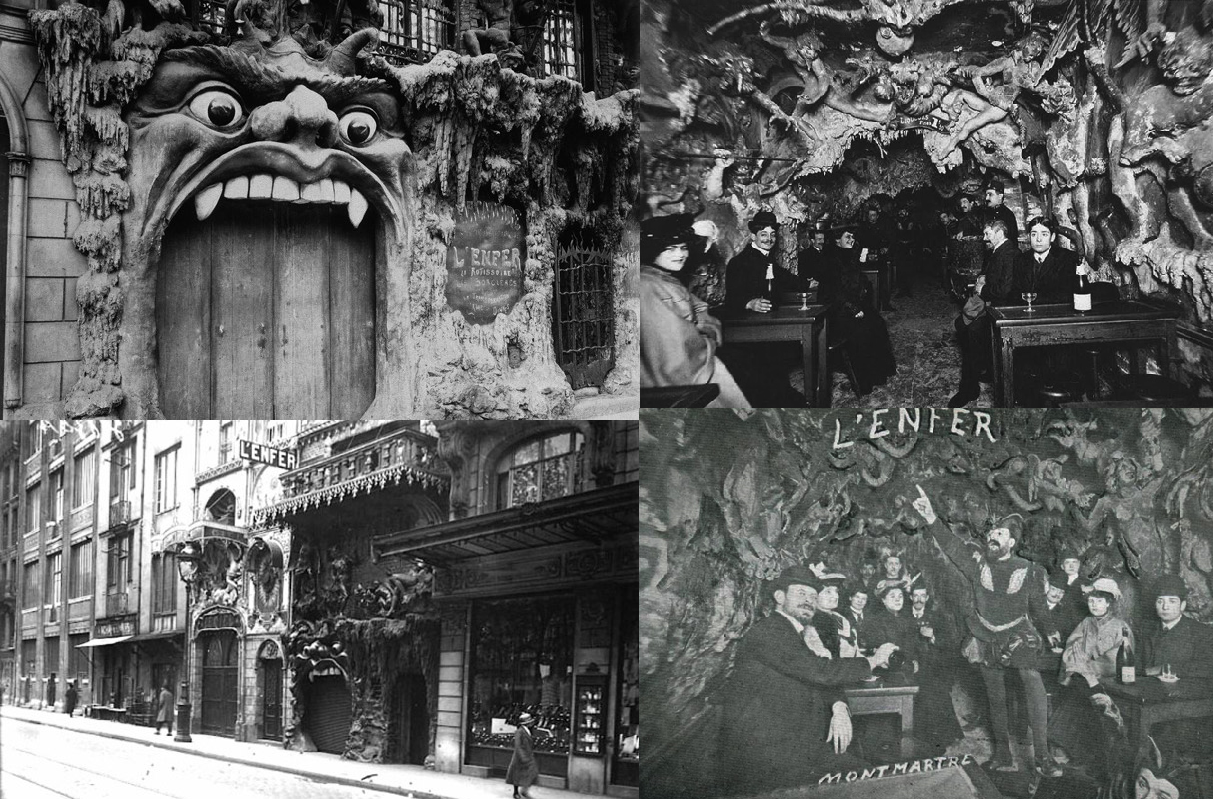 And of course, what would Hell be without Heaven so right next to Le Cabaret de l’Enfer stood the Cabaret du Ciel (The Cabaret of the Sky). At this heavenly themed bar, patrons were greeted by Dante and Father Time, served drinks by ladies dressed as angels and were entertained by St. Peter himself.

If I had a TARDIS this would be exactly the time I’d love to visit and of course I wouldn’t miss a little tour of these stunning club, needless to say they were shut down a long time ago.