Hey peeps! It’s been ages since my last post and I’m terribly sorry for that, but lately my life has become insane, in a positive way! October and November are going to be two wicked months, so I won’t be posting a lot. Great thing is that on November you’ll be able to see a huge news here on The Weirdo. Seriously, I can’t wait for it!

In the meantime I picked some interesting documentaries that I found on YouTube (who would have thought?!) for your eyes pleasure!

So, grab a cuppa or some pop corn and click on whatever link that might floats your boat!

Mental – A History of the Madhouse: https://youtu.be/oswUssXzFlY

Origin of the Vampire: https://youtu.be/OdwR6sskHv0

These are going to keep you busy for a while.

Remember that on October there will be the usual Halloween countdown on The Weirdo Facebook page. I’m sure you don’t want to miss that! 🎃

HAPPY HALLOWEEN WEIRDOS! Here we are with the last creepy fact as we finally reached Halloween, the coolest day of the year. I really hope you’ve enjoyed this countdown as much as I loved writing all these creepy facts.

Halloween is the one night of the year where being scared is supposed to be good fun, however, amid all the harmless activities like trick-or-treating, sometimes genuinely frightening and disturbing things can happen and because they happened to take place on Halloween, the following mystery has an extra aura of creepiness, and it remains unsolved to this day. In 1982, 69-year-old Marvin Brandland lived with his wife, Ethel, in Fort Dodge, Iowa. On Halloween that year, the Brandlands were handing out candy to trick-or-treaters who came to their house. At one point, they answered the door and were surprised to see a man wearing a mask. He said, “Trick-or-treat. Give me your money or I’ll shoot.” The Brandlands thought someone was playing a Halloween prank and tried to remove the man’s mask, but he wouldn’t let them. Instead, the masked man entered the house and pulled out a gun. He demanded that the couple bring him down to the basement and give him all the money they had stashed in their safe.

The Brandlands became suspicious since very few people knew they even had a safe in their basement. For this reason, Marvin was still convinced that a friend or family member was simply playing a Halloween trick on them. When the masked man led the Brandlands through the kitchen toward the basement, Marvin made a grab for the gun. The intruder wound up shooting Marvin in the throat before fleeing the house and inexplicably leaving his mask behind. Ethel was so traumatized by her husband’s death that she died only a few months later. Over the years, an acquaintance of the Brandland family had allegedly bragged about committing the murder, so DNA testing was performed on the mask. However, there wasn’t enough usable material for an adequate test, so there is still no evidence to charge this suspect and Marvin Brandland’s murder officially remains unsolved.

So, have a nice night peeps! Here a recap of the previous facts, in case you might have missed one:

Sometimes creepiest tales and urban legends really happened to real people, proving once and for all that nothing is more terrifying than everyday life.

The famous urban legend goes that a person is committed to his or her eternal resting place, even though they aren’t quite ready to take that final rest. Scratch marks are later found on the coffin lid along with other desperate signs of escape.

Apparently, this not only happened, but back in the day it happened with alarming regularity. In the late 19th century, William Tebb tried to compile all the instances of premature burial from medical sources of the day. He managed to collect 219 cases of near-premature burial, 149 cases of actual premature burial and a dozen cases where dissection or embalming had begun on a not-yet-deceased body. The general fear of premature burial led to the invention of many safety devices which could be incorporated into coffins, most consisted of some type of device for communication to the outside world such as a cord attached to a bell that the interred person could ring should he revive after the burial.

Unfortunately safety coffins aren’t in “vogue” anymore, so if you’re at the cemetery and hear a voice from the underground it might be a good idea to inform someone with a shovel… quickly.

Little note: Folk-etymology has suggested that the phrases “saved by the bell”, “dead ringer” and “graveyard shift” come from the use of safety coffins in the Victorian Era. (source)

Japan is a country with some really creepy, bizarre yet captivating past. Picking just one story was very difficult as Japan has a lot to offer in terms of spooky stories and urban legends (and movies! I highly recommend watching Hausu. It’s just a weird masterpiece, but I loved it a lot!). Domo arigato Japan!

Ancient Japanese believed that using human skeletons or parts of their bodies in construction would yield a strong support to the buildings. They also believed that the use of human skeletons would serve as a sacrifice to the gods and thus render more stability to the architecture, this practice is called Hitobashira.

Bones and other remains have been found on-site of several different locations, lending at least some possibility that human sacrifice may have been involved in the making of some buildings: this include the Maruoka Castle and the Jomon Tunnel. Train drivers have reported hearing ghostly noises under the tunnel, which is believed to be the screams of those who were buried in the walls to support the foundations.

Stories of hitobashira and other human sacrifices were common in Japan as late as the sixteenth century, needless to say that currently, hitobashira is no longer practiced in construction. 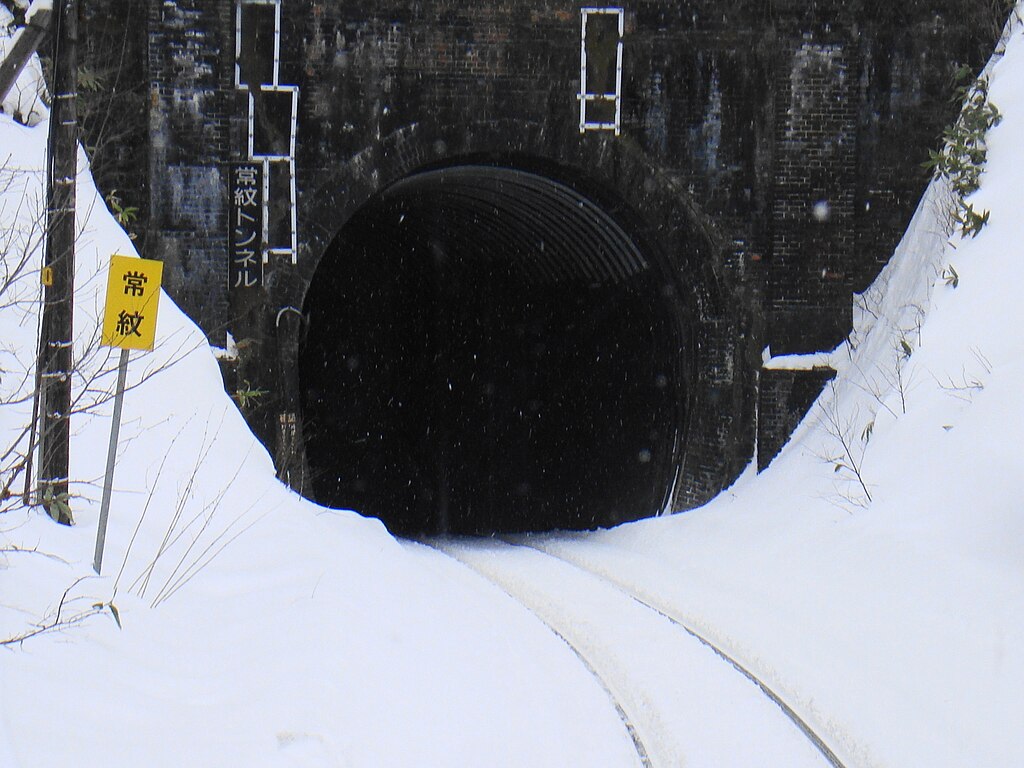 Hairy hands is the name given to a ghost believed by some to be responsible for the high number of motor accidents on a stretch of road in Dartmoor. Many drivers have reported feeling a hand take hold of their steering wheel and forcing their vehicle off the road.

According to the story surrounding them, the Hairy Hands are a pair of disembodied hands that appear suddenly, grab at the steering wheel of a moving car or the handlebars of a motorcycle, and then force the victim off the road. In some cases the hands are described as being invisible. That’s the story that’s been repeated many times since the first incident in 1921, when a Dartmoor Prison guard was killed as his motorcycle went out of control and crashed.

This happend again when another motorcyclist were driven off the road at the same spot, this time the passenger saw a large hairy hand grab the handlebar and forcibly crash the bike. In one incident, in 1924, a woman camping on the moor with her husband reported seeing a hairy hand attempting to gain access to her caravan during the night, she reported that the hand retreated after she made the sign of the Cross.

Most variations of the legend of the Hairy Hands do not specify the origins of the hands or attribute to them any specific purpose, other than driving motorists off the road. A few local versions of the story attribute the hands to an unnamed man who died in an accident on the road, the ghost of a deceased Dartmoor Prison inmate or an evil spirit wandering the moor. Well, whatever it is be careful if you find yourself driving in that place.

Victorian England was a time and place where creepiness ruled pretty much all aspects of everyday life, which is why I love this era a lot. One creepy part of Victorian times was the subject of death, Victorians had a very particular and strong relationship wiht it (-HERE– you can find a post that I wrote about Victorians) and somehow they managed to make it just a bit weirder.

The graveyards and burial-grounds of early nineteenth-century London, full to the brim with human remains, presented many a grisly spectacle. Demand vastly exceeded supply when it came to finding space to bury the dead. The method used for the disposing of bodies was a burial in small, urban church yards, burial grounds, or vaults. It wasn’t an uncommon sight to find 20 coffins in a single grave, all stacked on top of each other.

This brought greedy gravediggers to disturb, dismember, and destroy corpses as a way to make room for new bodies. It was pretty common to find bones and rotting body parts scattered around graveyards as a result of careless, callous gravediggers. But here the situation gets a lot more weird: gravediggers reportedly used to play a game called Skittles, a precursors to modern day bowling, with the bones of the deceased. A behaviour like this was just another symptom of graveyard overcrowding during Victorian times.

‘I’ll cleave you from the skull to the twist, and make nine skittles of thy bones”

Ireland is famous for its vast mythology, from leprechauns and fairies to banshees and kelpies, the Emerald Isle has at least as many legends as it has real, recorded history. But not every Irish legend is fairy tale material.

The Black Cat of Killakee is an old, legendary creature that has reportedly been sighted for centuries. However, its legend really sprung to life in 1968, when a young couple bought the rundown Killakee House in Dublin and started renovating it. The workers soon reported strange sounds and eerie events, which culminated when a huge black cat with glowing demon eyes started haunting them. The lady of the house first thought the workmen were merely superstitious, but soon, she and her husband started encountering the beast as well, the Black Cat appeared in hallways and areas with clearly locked doors, staring and snarling at frightened witnesses.

Before long, an exorcism was performed in the premises. This took care of the cat, at least, for a few months. An unwitting séance held by a group of actors not only brought the Black Cat back, but also caused the house to be haunted by a pair of ghostly nuns who, claimed by a medium, were the unhappy spirits of two women who had assisted at satanic rituals held by the “famous” Hellfire Club in the 18th century.

The Weirdo.
Blog at WordPress.com.